Ham: An Obsession with the Hindquarter 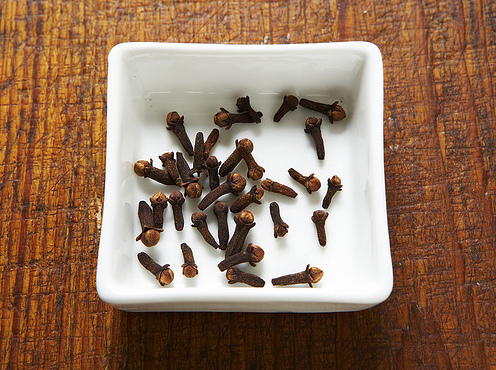 This image courtesy of Joseph DeLeo

Bruce wanted to develop a recipe that honored the first taste of the meat by using the simplest preparation: roasted, not fussed up. So here’s his basic recipe for a fresh ham. Yes, it requires several hours of slow cooking. Open another bottle of Pinot Noir and relax.

NotesEight pounds ain’t a whole ham by a long shot. These things can weigh up to 24 pounds, maybe a tad more from those linebacker hogs. Because of their sheer size, most hams in the United States are halved for sale-or even cut into smaller sections. We’ve tried this roast with several cuts and prefer the shank end.

In North America, maple syrup is sold in various state-sanctioned grades: A and B are the usual divisions, with A parsed into several finer demarcations. Basically, the lower the grade, the more intense the taste. Grade A Light Amber or Grade A Fancy would be fine for pancakes but bad for a long spell in the incinerator that is your oven. Better then to go with the lower, cheaper grades, like Grade A Dark Amber (our preference for pancakes, too, by the way) or even Grade B, usually reserved for baking. No matter what, don’t swap a corn syrup-laced imitator for real maple syrup.

Such a paltry little bit of spice rub? Indeed. We tried more, but it just got in the way. Frankly, the best roasted fresh ham has a thin crust and then lots of juicy meat, not a big glob of spices glued to the fat.

We’ve roasted hams in the broiler pan from our oven, in a flimsy aluminum roaster from the supermarket, and in a wallet-busting, heavy roasting pan from a fancy kitchenware store. You can just guess which did best. The 401(k)-emptier, of course. It gave the best crust, the best caramelization, and the best overall performance.


Round out the meal

Now that you’ve roasted that big joint, you may want to have some other things on the table, lest your guests fall into a meat coma.

First, some roasted root vegetables. While the ham roasts, peel a few parsnips, a couple carrots, and a turnip or two; chop them into 1-inch pieces. Also peel, halve, seed, and chop a small butternut squash. Place everything in a large roasting pan, drizzle with a generous amount of olive oil. Sprinkle with salt, and roast in a preheated 325°F oven for 45 minutes, stirring occasionally. Then add some small Brussels sprouts. Stir well and continue roasting for another 30 to 40 minutes.

Also a brown rice dish. Cook 2 cups long-grain brown rice with a little walnut or almond oil over medium heat for 1 minute, just until sizzling; then stir in 5 cups vegetable broth and 1 teaspoon dried sage. Bring to a simmer, then cover, reduce the heat to low, and simmer until the rice is tender and the liquid is absorbed, about 45 minutes. At the last, stir in some chopped dried cranberries and chopped pecan pieces, as well as a splash of balsamic vinegar, a little salt, and a few grinds of black pepper.

For dessert: In a large bowl, stir some pitted and halved plums in a little vodka, a couple teaspoons of sugar, and some finely grated lemon zest. Refrigerate for a couple hours to marinate. Serve the fruit and its sauce over scoops of purchased lemon sorbet. 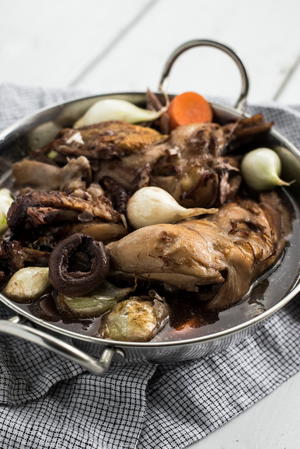 It's one thing to make a chicken recipe, but it's another if you're attempting Coq au Vin! This recipe takes several days to prepare,… See more 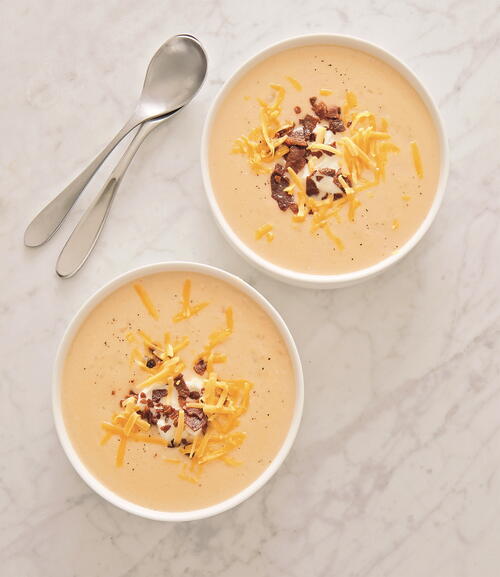